“The overall plan for replacing the technical equipment for the factory fire service also included preparing the replacement of the existing load change system (two traction engines with Meiler transport system and 6 containers with different loads). The objective was to retain the advantages of the old system (loading of heavy equipment on roll-on containers and ground-level unloading) while greatly improving the alert organisation (dispatch time, time required for hitching and unhitching, availability of special technical equipment at the emergency site). After researching possible technical solutions in depth and many discussions, the focus fell on semitrailer trucks.Traction engines proven a million times over, without complicated additional technology and with substantially larger loading volumes compared to classic containers, offered the desired benefits for the re-organisation. After a solution for the unloading problem was found with the side lift technology, the ideas were ready for development with a good partner.”

The fire fighting body as well as the trailers were completely designed and built by EMPL. This was the only way to ensure that all requirements from the factory fire service could be implemented.

The hazardous goods and pump hose trailers are closed with side lifts (1,000kg) which allow fast and ergonomic loading and unloading of the roll - on containers and the other loaded items.The equipment compartments at the front are closed off with roll-up doors and accessible via folding steps.The energy for the LED - lighting system and the side lifts is provided by a battery system installed on the trailer, supplied by the chassis or by a portable generator installed on the front side.

HAZARDOUS GOODS + HAZARDOUS GOODS TUIS SEMITRAILERS
Both trailers have almost the same design and are equipped with a wide range of hazardous goods equipment. G1 and G2 are equipped with a large compressor which can be operated with the trailer and is required for driving a compressed air membrane pump. Chemical protection suits and various additional equipment are loaded in G3 and G4. 4 roll - on containers can be unloaded via the side lifts on each the left and right side. The rear features a folding platform which allows unloading of the form-retaining chemical hoses loaded in the body.

Frank Hesselbarth: “The hazardous goods trailer is designed for the removal of spilled substances in chemical plants and on transport routes (road, railway). In addition to technical equipment for collecting, sealing or repumping, the trailer is equipped with a complete decontamination system. Removal, transport and use of the technical equipment are organised in such way that they can be implemented even with the relatively small personnel resources of a factory fire service. The factory fire service at InfraLeuna GmbH has been a member of the transport, accident, information and help system (TUIS) of the VCI (association of the chemical industry) since 1991 and is active as an emergency control centre as well as on rescue level 3 (help with team and equipment on site). The TUIS trailer was designed to optimise these types of callouts and for a substantially improved support of public protection units without limiting the safety of the chemical plant.”

PUMP HOSE SEMITRAILER
Like the hazardous goods semitrailer, the pump hose trailer is also equipped with G1-G4 and loading space for roll-on containers accessible with side lifts. Additionally, the rear section is also designed as a loading platform which is closed with a folding loading side panel, allowing placement of 3,000m of 75mm hose (divided into 3 containers) while driving.

Frank Hesselbarth: “The pump - hose semitrailer covers the callout scenarios in connection with water. Examples are flooding, strong rain with many simultaneous callout locations, burst pipes in underground systems with diameters up to 1,400mm or bottlenecks in water supply for fire fighting. Motorised pumps, electric pumps, hydrant wrenches, plans for the underground systems and hose lines up to 3,000m for placement almost without personnel are the equipment loaded for mastering these tasks.”

FOAM RESERVE SEMITRAILER
In addition to the equipment compartments 1 - 4, which are used for storing various water cannons and valves, the vehicle is equipped with an 11,000l foam tank from which a foaming agent pump (1,000l/min) can distribute foaming agent to other vehicles.

Frank Hesselbarth: “The semitrailer provides the required foaming agent reserve for larger fires. The installed pump distributes the foaming agent from a central point to the positioned emergency vehicle. The pump is designed to also allow optimum distribution of further reserves provided by third parties. It is irrelevant whether these reserves are provided in barrels, IBS or - as agreed with our cooperation partner (the factory fire service of the TOTAL Raffinerie Mitteldeutschland GmbH) - in 20m³ trailers.”​​​​​​​

Once again EMPL was able to convince the experts of the factory fire services and to present an innovation together with the fire service. Always following the principle:

EMPL: Starting out as a great idea – even better in reality! 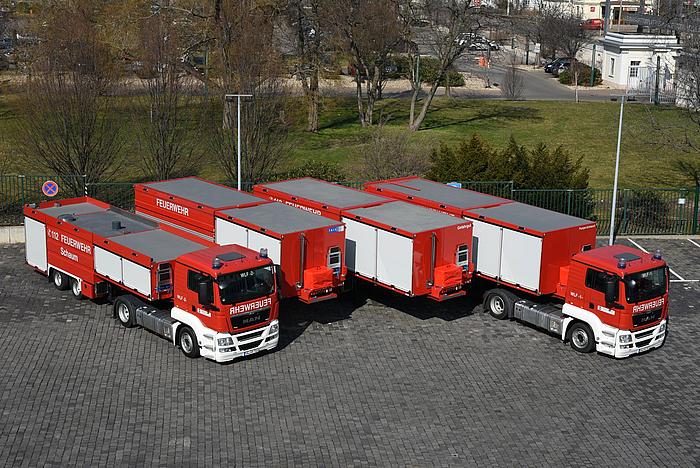 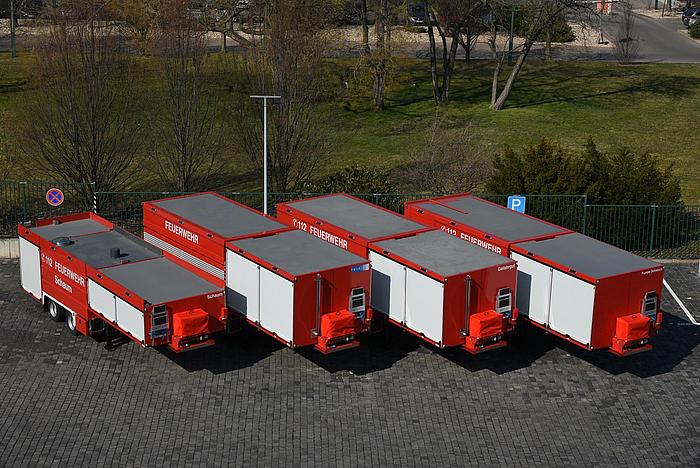 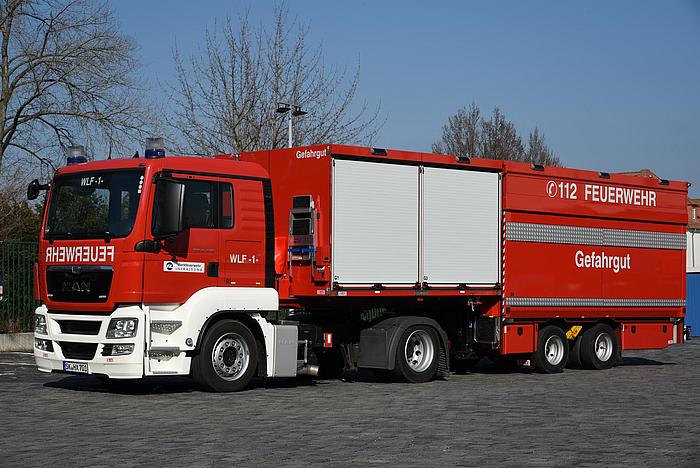 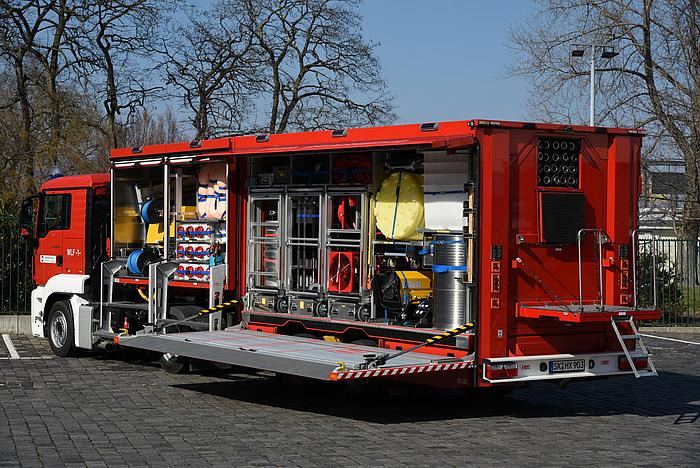 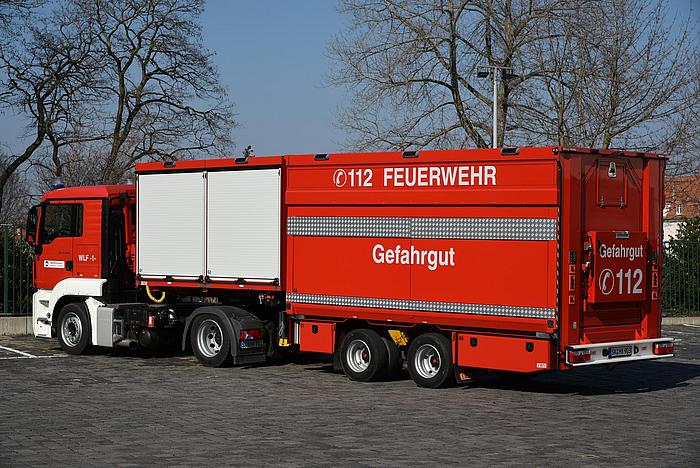 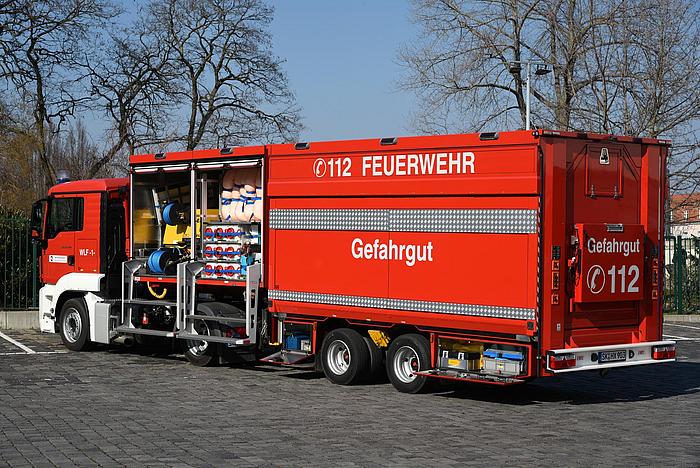 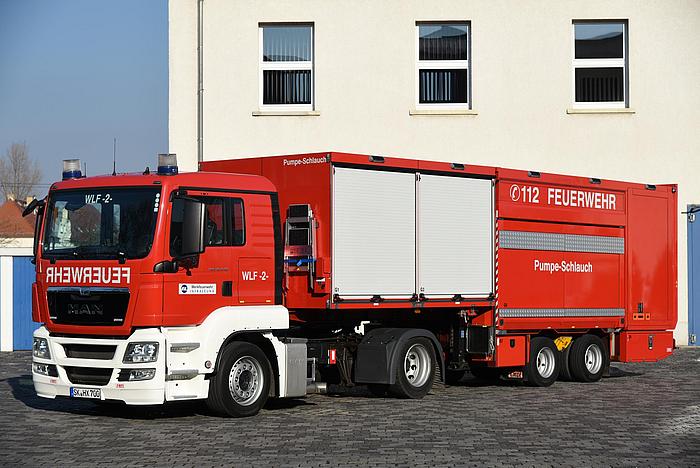 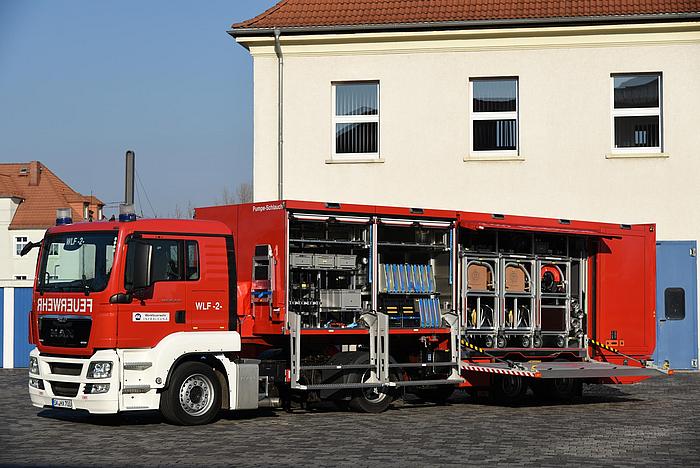 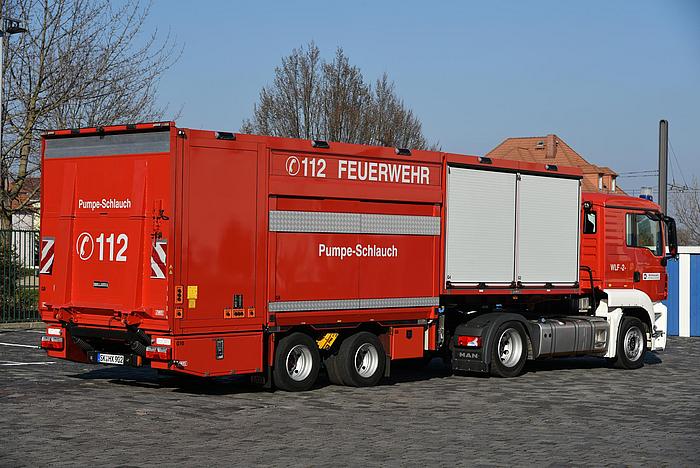 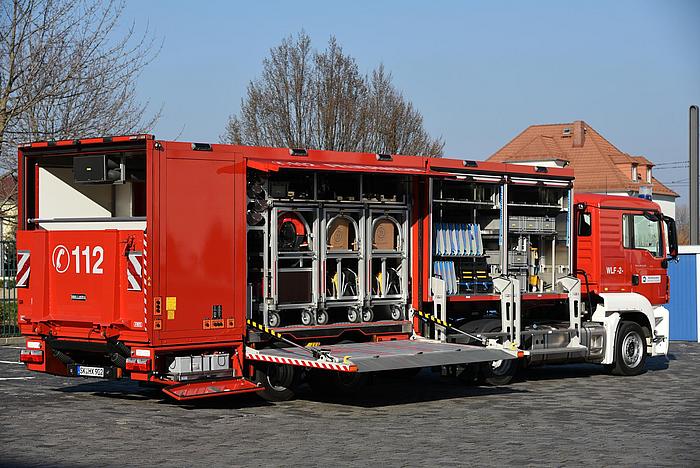 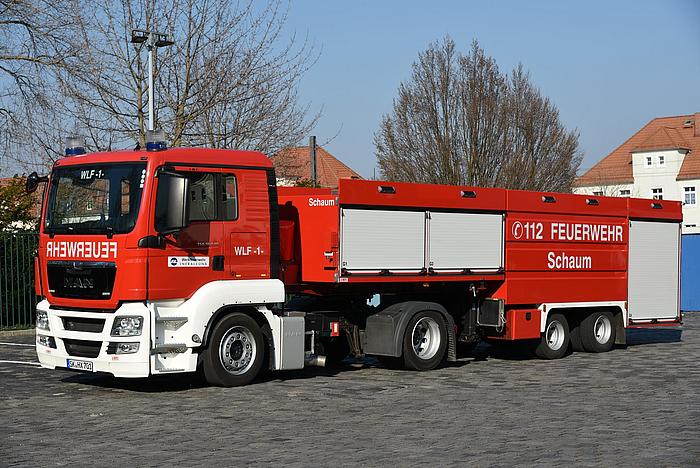 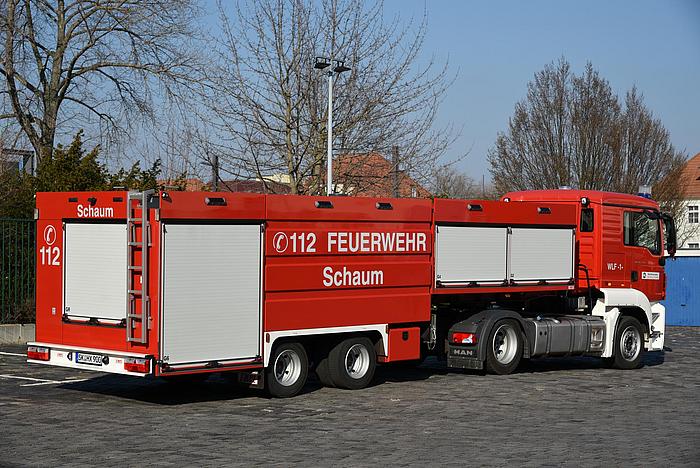 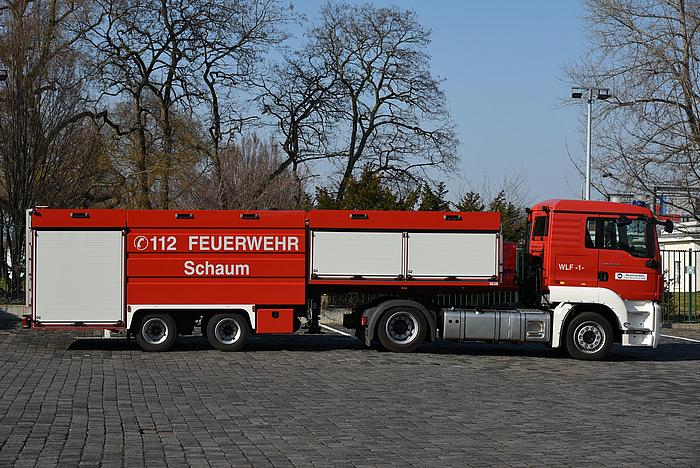 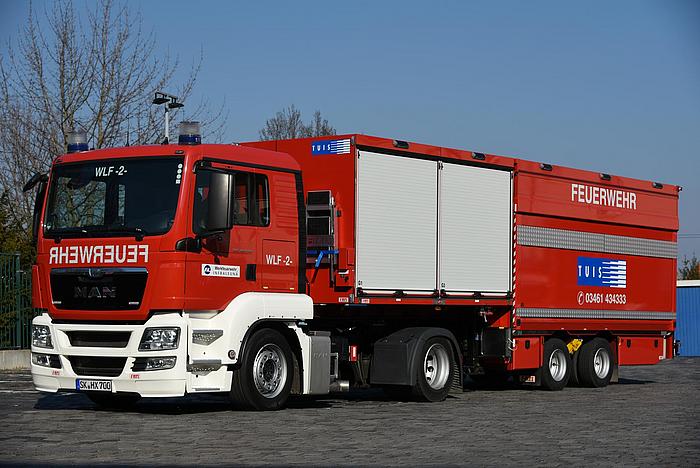 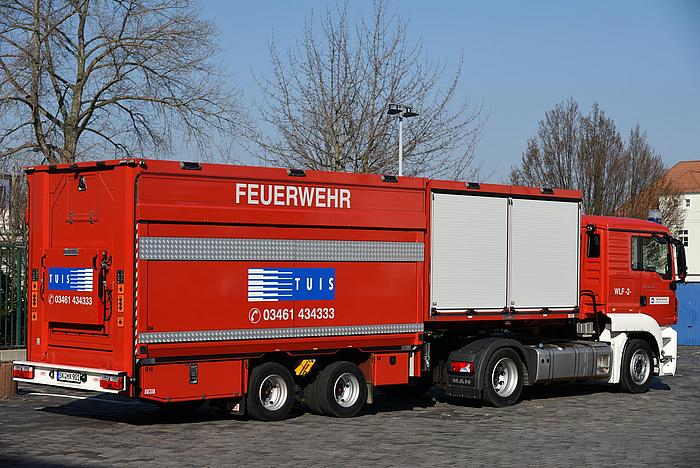 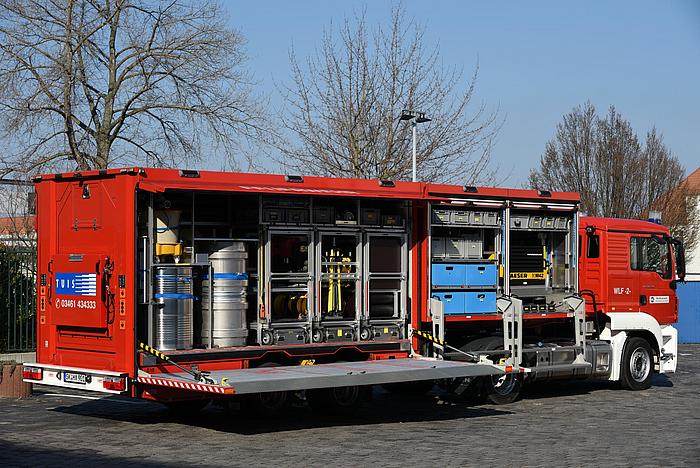 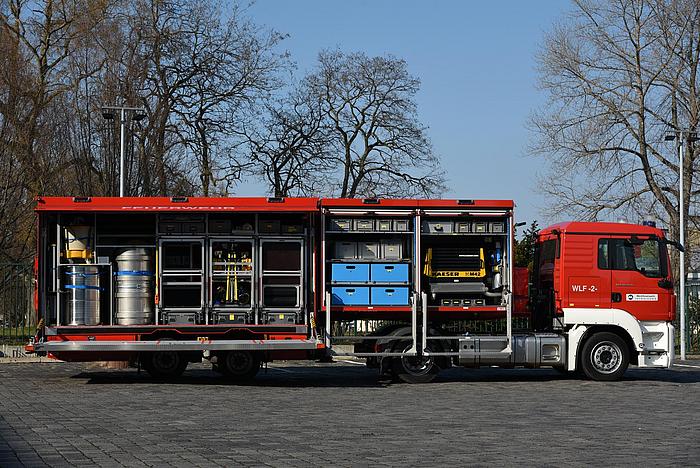