It took 29 years until the old pumper with rescue equipment at the Ried im Innenkreis Volunteer Fire Brigade was finally allowed to retire and was replaced with a state-of-the-art emergency vehicle.

Special new features for the Ried im Innenkreis Volunteer Fire Brigade compared to the retired Steyr 13S21 from 1990 include the division of the equipment compartments into fire-fighting and technical tasks, the integrated cable winch at the rear or the continuous self-supporting platforms at the equipment compartments, which greatly facilitate removal of heavy equipment. The pumper is ideally equipped for fire fighting as well as for responding to natural disasters, hazardous goods tasks and traffic accidents.

RLF 4000/100
The new Scania P410 with long CrewCab was used as the chassis for the pumper with rescue equipment. The crew compartment, which was specially developed for emergency services, stands out on account of its flexibility, ergonomics and safety. The members of the fire brigade where wholly convinced by the perfectly adapted EMPL body. As an all-wheel drive was not required, the pumper is the first fire fighting vehicle in Austria of the new Scania truck generation from this series with 4x2 drive.

The driver’s and crew compartment are designed for a crew of 1 + 6 and are equipped with 3 EMPL Eagle breathing apparatus brackets with integrated safety opening in the seat surface. The cab also features helmet brackets for driver and front passenger as well as a storage compartment between driver’s and passenger seat. Against the direction of travel, the crew compartment contains a storage and shelf system for boxes, helmets, emergency backpack and electrical equipment.

The driver can use a tablet and a reversing camera to help with navigation. This has already proven very successful in several vehicles of this fire brigade.

The body structure is made from EMPL Fire Fighter Alu-Tech. The vehicle is equipped with a 4,000 litre water tank and 100 litres of foaming agent. The rear of the vehicle contains the EMPL FPN 10/2000 integrated pump and, above it, the fast attack consisting of a 60 m shape-retaining 25 mm rubber hose with hollow jet pipe and electrical reel winding. An integrated cable winch with 7 t capacity and cable extension to the rear as well as the pneumatic light mast in swivelling LED design are also operated from the rear.

The vehicle is equipped with three equipment compartments on each side. The passenger side primarily contains the equipment for technical tasks. This includes the emergency power generator, air cushion set, lighting and barrier materials, oil absorbing canisters and unwinding devices for compressed air and electricity. The G5 houses all implements for responding to serious traffic accidents. The driver’s side mainly holds equipment for fire fighting, such as water-conducting fittings and hoses, foaming agent canisters, high-performance fans and hand-held tools. Immersion pumps, power saws, hygiene board and protective suits are also stored.

The walk-on roof features a rescue basket, hose protection ramps and various long-handled tools in a roof box with telescopic gas support and integrated interior lighting as well as a 4-part scaling ladder. 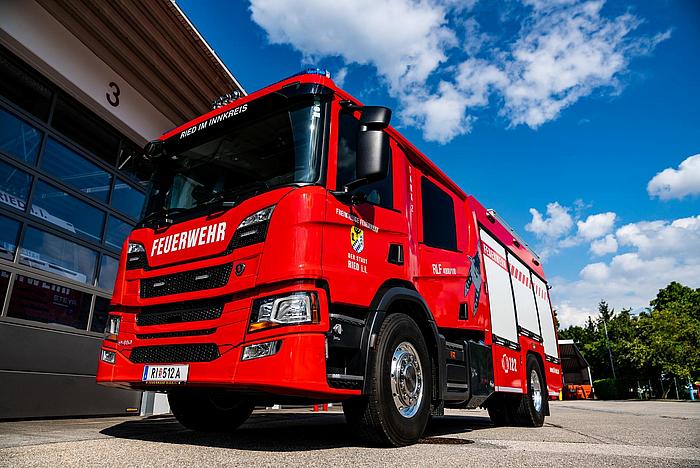 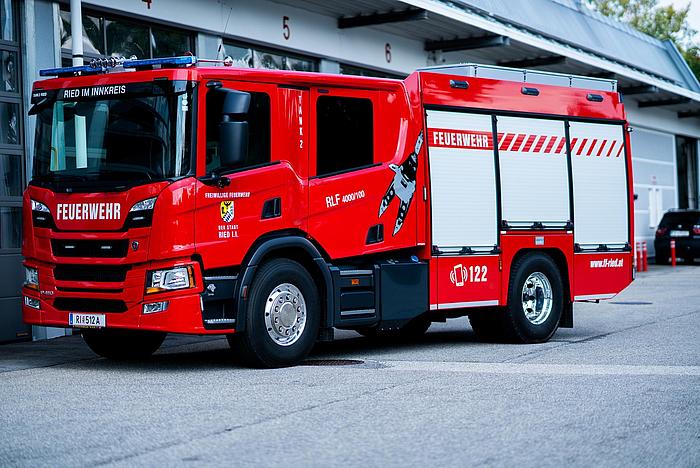 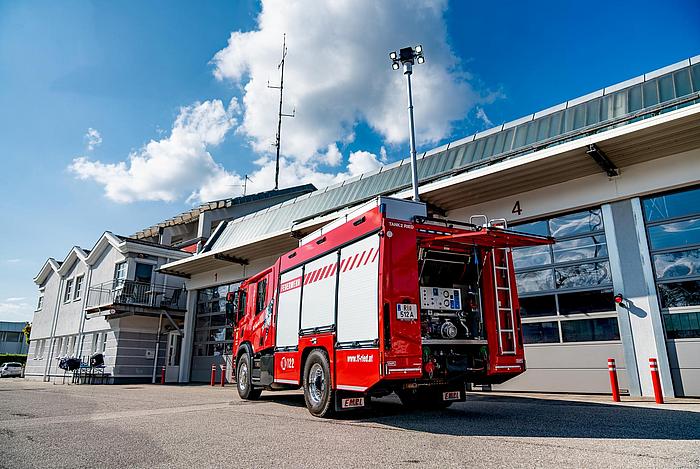 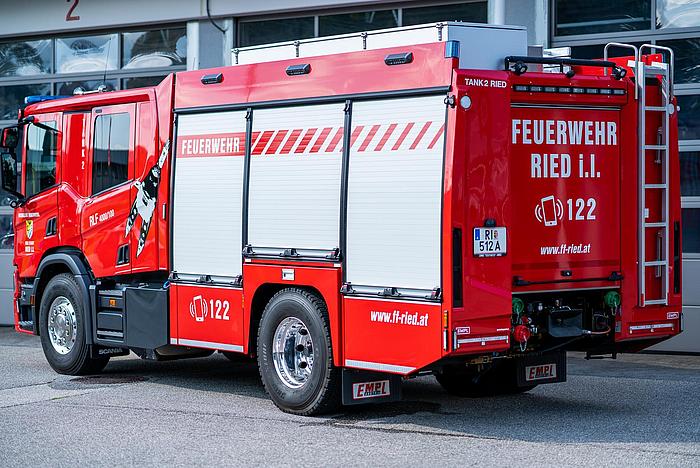 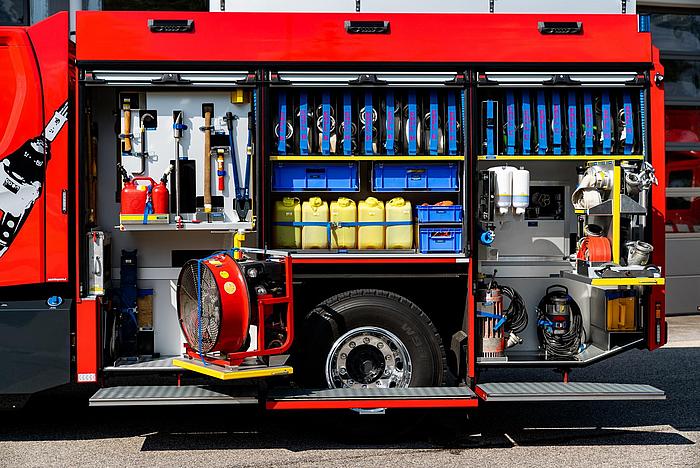 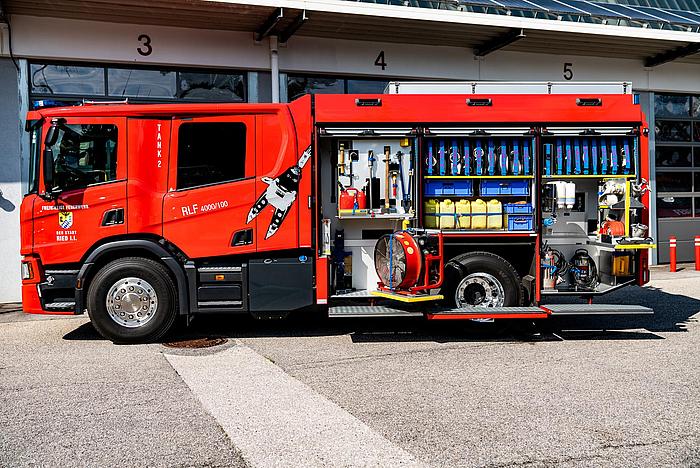 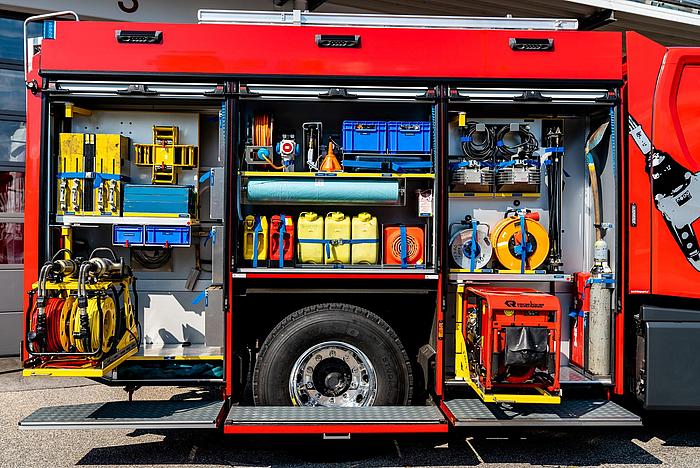 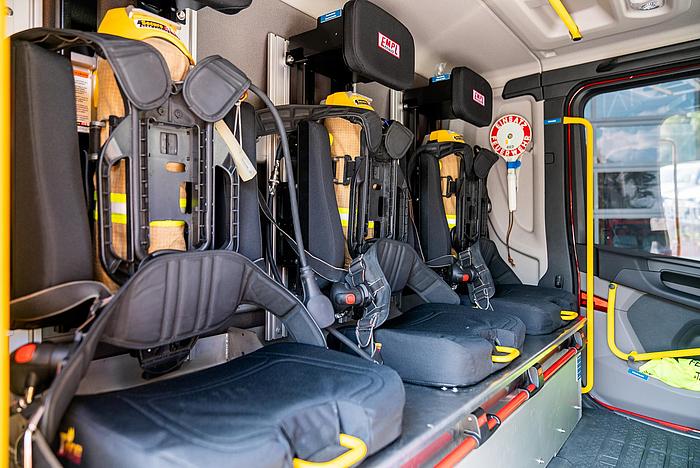 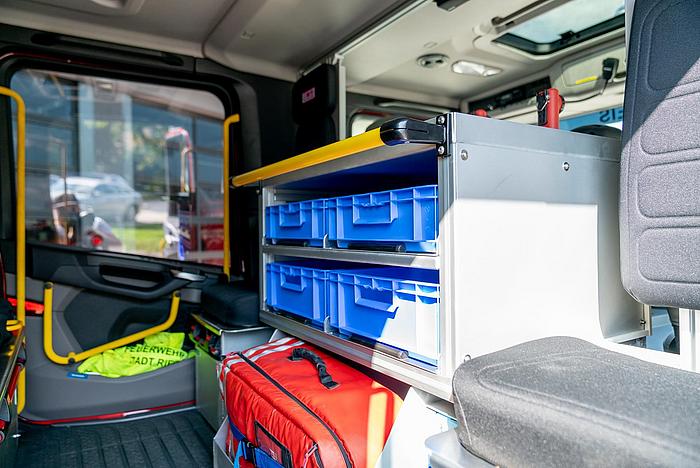 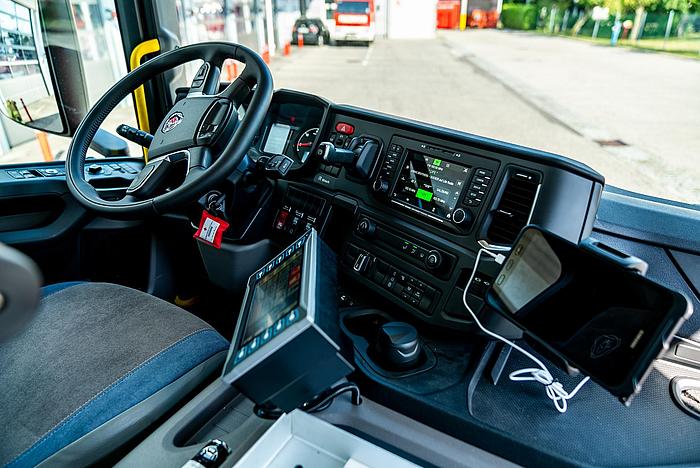